PDSA Cycle - cyclical four stage improvement process: Plan - Do - Study - Act. The process is promotes continual improvement. The plan stage includes gathering data on the current situation and past history. The do stage is actually a experiment stage where possible improvements are tested as pilots (on a small scale). In the study stage the results of those experiments are studied. And the act stage is used to adopt improvements if the experiment found successful methods. 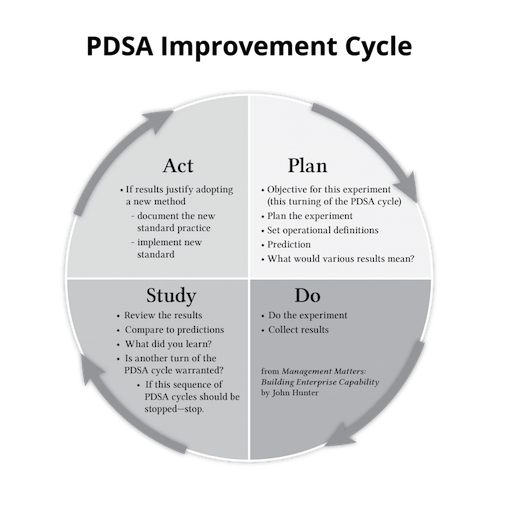 All sorts of variations on this improvement process are used. In some models, if more experiments are needed then that is what the act stage does. And then the Plan stage is a study of those results and then planning for new experiments. This process is also called the Deming Cycle and the Shewhart Cycle. Deming brought the process to many and so some used the Deming Cycle name but he learned the process from Shewhart so would refer to it as the Shewhart Cycle or PDSA cycle. The PDCA is the same model just using the terms: Plan - Do - Check - Act.

An important practice (as Deming taught) is to document what improvements are expected in the planning stage. Without doing so it is difficult to learn and often results in the study phase being neglected altogether.

It has also been called CAPDo (which I learned from Joiner Associates - Brian Joiner and Peter Scholtes). This modification was made to match how the cycle was often used in practice: checking current data that is available, acting (experimenting), planing (reviewing the results and planning the next course of action - standardization or more experiments).

The key is to use this as a cyclical process. However, most often it is not. Often the only action is to decide on a modification and to do it (pD). An excellent book for those interested in applying this improvement tool is the Improvement Handbook by Gerald J. Langley, Kevin M. Nolan, Clifford L. Norman, Lloyd P. Provost and Thomas W. Nolan. Related terms: Online Resources (yes 4 are from authors of the Improvement Handbook):