I visited Olympic National Park during June, 2005. I arrived from Mount Saint Hellens and stayed for 5 nights at the Lake Crescent Lodge. I planned my hikes largely using Best Easy Day Hikes: Olympics (which I recommend) and by talking to the rangers.

Rain was often my companion during the visit, no surprise. When I woke up one morning and it was sunny I went off to Hurricane Ridge. It was the right decision, the hike was exceptional; great vistas the entire time and clouds had filled the sky by the time I returned to my car.

I also drove up to the Rugged Ridge trail, which was the wrong decision. I was just happy to be alive when I finally got back on a real road. The road keep slowly getting worse until it finally got scary, by which time there was no way to turn around until the end. A more sensible person would have turned around earlier but not me.

Ruby Beach was great. You can walk on the beach and extend the hike. The book didn't mention that and the ranger that suggested Ruby beach said you couldn't hike there. I don't know what he was talking about.

The Ozette loop trail was also excellent though the weather wasn't so great that day. The Hoh rain forest was nice but it was my biggest disappointment, it just wasn't as spectacular as I had hoped. Also there are not many hiking options.

I don't have any picture but the short hikes near Lake Crescent Lodge are quite nice also: Marymere Falls as well as a couple short self guided trails. 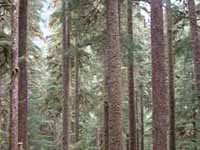